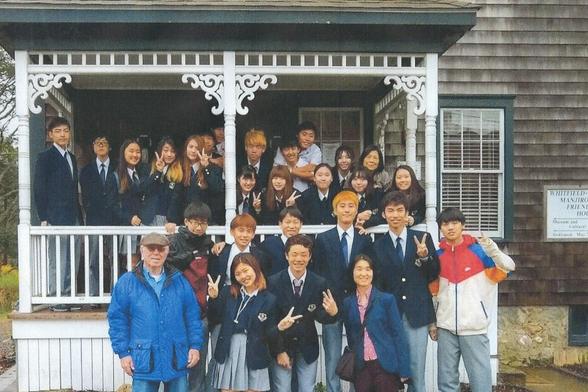 STUDENTS AND STAFF OF KEIO ACADEMY SHOWN DURING THEIR VISIT ON MONDAY, APRIL 22, 2019.

On August 14, 2012 Dr. Shigeaki Hinohara journeyed from Japan with 30 other visitors to the Cooke Memorial Park in Fairhaven to dedicate the cherry trees he had donated to the town. Also in attendance were Fairhaven Selectmen Dr. Brian Bowcock (chairman), Mr. Charles Murphy, Jr. and Mr. Robert Espindola as well as, Consul General and Mrs. Hikihara, Ms. Tomoko Nakahama, her daughter, Kei Konishi (5th generation descendant of Manjiro) and Gerry Rooney, President & CEO of the Whitfield-Manjiro Friendship Society. The group was joined by Mr. Junji Kitadai (Manjiro historian and current member of the Executive Committee of the Society) and six members of the Kochikenjinkai of New York.

In his remarks Dr. Hinohara’s stated, “…Japanese cherry trees were planted on the banks of the Potomac River in Washington, D.C. exactly 100 years ago as a token of friendship between two great nations. In the same spirit, we are happy today to be able to plant 17 cherry trees at meaningful places in Fairhaven and New Bedford. I sincerely hope these cherry trees will grow strong and bloom beautifully and become constant reminders of the spirit of Captain Whitfield and Manjiro.”

The dedication ended with the presentation of a granite bench with plaque in Dr. Hinohara’s honor from the Town of Fairhaven. The bench is located in the Cooke Memorial Park.